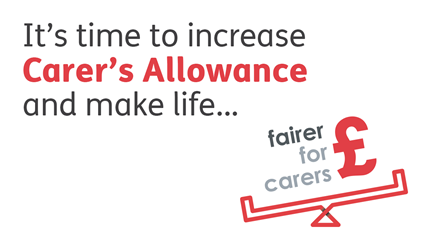 Alongside 74 other organisations, we have today written to both the Work and Pensions Secretary and the Chancellor, calling on the Government to raise Carer’s Allowance as part of Carers UK’s #FairerForCarers campaign.

Carers UK originally wrote to both back in July about this issue. They say “We are shocked and very disappointed that, to date, we have not received a response to that letter. It is simply not good enough.”

Despite the huge contribution unpaid carers are making, too many carers and their families face financial hardship. At least 1.2 million carers are living in poverty and – on average – each day, 600 people have to give up paid work to care.

Carers and those they care for are now facing even bleaker financial situations than before, as the COVID-19 pandemic continues to inflict real financial hardship. This will be worsened as we face winter and carers face the additional impact of higher fuel bills.

It is not too late for the Government to recognise the vital role that unpaid carers play, and to put in place much needed financial support ahead of this coming winter. It can only be right that we give back to carers who have done so much for others during this crisis. Without this help, many will continue to face real hardship and suffering.

Read the open letter and find out more about the #FairerForCarers campaign here.