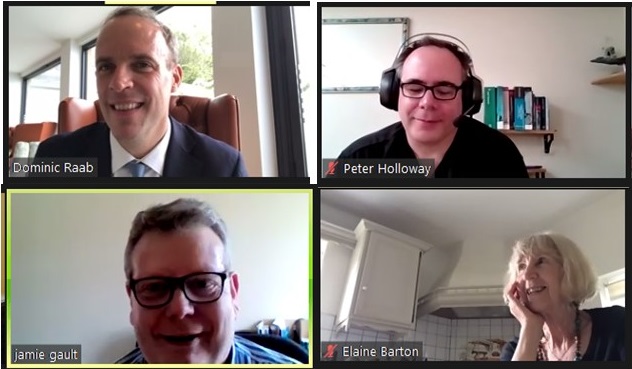 We were pleased to welcome Dominic Raab, MP for Esher and Walton, and Foreign Secretary, to a ‘Carers Q&A’ as part of our Carers Week, on Friday 11 June.

A number of carers were in attendance, with others submitting questions in advance. We covered a great deal, including questions on: the Health and Social Care Bill, financial challenges/Carers Allowance, access to dentists, the predominance of female carers, and more.

Dominic Raab acknowledged the huge and valuable role carers play, and have played in this past year especially, and expressed his concern for the challenges the carers in attendence, are facing,

On the Health and Social Care Bill, he said ‘What we have with the White Paper now is a chance to get it right. The consultation stage we are in now is very important. We look very carefully at the feedback we get, especially similar themes arriving in high volumes and from different parts of the country.” Though he did reference the challenge of financing it, and difficult decisions having to be made – similarly re the paltry 35p a week increase in Carers Allowance, raised by another attendee.

He also promised to look into some matters raised by carers living in his constituency, including around dentistry and night-time support for carers. One of the carers who submitted questions said to us: “Thank you so much for your responses. It is incredible to get questions form carers direct to the government, so well done in achieving this.” Our thanks to Dominic Raab for his time, and support.