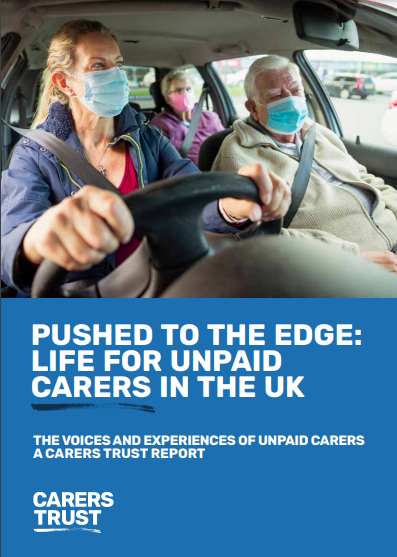 Pushed to the edge: over 90% of unpaid carers feel ignored by the Government

Carer’s Trust have released the results of their recent survey into carers’ needs, how carers feel about their support from government, and the impact of caring. It was completed by over 1,550 carers, including many of you in Surrey.

Unpaid carers overwhelmingly feel their needs have been ignored by successive governments. And as well as affecting their physical and mental wellbeing, many are being driven into financial hardship because of caring.

The findings in full, with analysis of the situation and strong recommendations to Government are in Carers Trust’s new report ‘Pushed to the Edge’. The research and report are getting good coverage in the media, and Carers Trust will be doing everything in its power to influence the Government that it must do more to support unpaid carers – through immediate support like an increase to Carer’s Allowance; and through development of a cross-department national strategy for carers. Read more on the Carers Trust’s website.

Pushed to the Edge